Huitres + vegan burgers and pastries in Paris 👀🐹
It’s been nearly a year since I got on a plane. It hasn’t been too hard: I’ve been on holidays via train, bus, car and boat. (Paris bus station at 2am was a low, mind.) ⁣⁣ ⁣ I’m willing to spend more time and money because I know that a few flights a year would easily add up to half of my carbon footprint. ⁣⁣ ⁣ We do need to tackle the biggest polluting companies (they are all fossil fuel firms) rather than focusing on individual sacrifices, however. This means a radical overhaul of much of our infrastructure, which relies on oil and gas, and we need renewables-powered electric vehicles asap.⁣⁣ ⁣ But by flying, I’m fuelling the fossil fuel industry. I actually can't conscionably fly any more. I’d be buying into unnecessarily high fuel consumption. Burning fuel at high altitudes results in stronger warming than at lower altitudes – water vapour in plane contrails is said to have a greater warming effect than the fuel. Planes also often travel when they’re not full, wasting energy.⁣⁣ ⁣ Planes account for 2% of global carbon emissions (some put it higher) but aviation industries are only planning to expand. UK ministers back expansion of around 50% and our airports are planning to expand almost three times faster than the government’s climate change advisers say is sustainable, according to Sky News in October. ⁣⁣ ⁣ Meanwhile, Airbus predicts double the number of global planes will be flying in 20 years.⁣⁣ ⁣ Electrification is not happening fast enough for long-haul electric planes to be viable any time soon. And the UK is the third highest aviation-related carbon emitter after China and the US, according to the International Council on Clean Transportation.⁣⁣ ⁣ We have 10 years to avoid irreversible damage to our planet, says the UN. And the UK’s overall emissions are increasing, not falling. Aviation is set to be our biggest source of emissions by 2050.⁣⁣ ⁣ I’m not sure how I can tackle the climate emergency. But while I figure out where to focus my efforts, I can’t bring myself to fly anywhere. It would be a symbol of recklessness in the face of catastrophe, in a world where even those who are aware of the facts are living in the same way they always have done.
Gotta pitta pocket or two, boi
Grand Designs: Wales edition
Goodbye office life (for now, for ever?!) have some dark chocolate and rye cookies 🍪
I hereby name this pie Michel Rhu Jr In November, my sister Hannah took in four battery hens from the British Hen Welfare Trust. They looked skeletal and raw, having spent their lives inside in the dark with no space to stretch their wings.

But now three of them are doing great and it’s wonderful to see them running up to greet visitors, exploring, dust-bathing and generally being crazy chickens. Sadly one died early on, not used to the cold.

Hannah and I made a video to highlight just how much difference a bit of care and space makes to their lives. The take-home message is that we shouldn’t be eating chicken and eggs that come from cages.

And even free-range systems vary so much that hens could still spend most of their lives crammed in dark barns.

In the first three months of 2018, according to Defra, 45% of eggs in the UK were still from caged hens while 51% were free range.

The solution is to either buy organic eggs, which have higher animal welfare standards, or avoid eggs and chicken entirely. I really find it hard to believe that (even drunk at 2am in the chicken shop) anyone would want to eat the eggs or meat that came from hens that looked like Hannah’s did.

If you’re one of the 80,000 who have signed up to Veganuary this year, help is at hand! These are five recipes that I would be making if I was vegan or not.

Of all the mainstream diets, veganism has the lowest impact on the planet. Going veggie is a huge help but dairy often has a bigger carbon footprint than chicken or eggs. This paper by Oxford University academics suggests vegan diets have half the greenhouse gas emissions of normal meat diets.

The list of ingredients is a little long but I couldn’t believe how good it tastes. It has protein in the pulses to fill you up, and you can add vegan cheese to the top while the pie is cooking if you’re missing dairy. I’m usually very suspicious of vegan cheese but when it’s melted it all seems to be much nicer!

This one is going to seem mad but I can’t tell you enough how good it is. The combination of potatoes, carrots and nutritional yeast seems improbable — but it works and the best thing is, it’s so much healthier than actual cheese!

For dinner, I cut tortilla wraps into triangles, bake them in the oven for 10 minutes until toasted, pour the cheese sauce over the top and add salsa, jalapenos, refried beans and anything else vaguely Mexican. Do it.

I am forever sharing the recipe for this smokey red pepper, tomato, almond and paprika dip. I’ve taken it to pretty much every party I’ve ever been to. It also involves barely any cooking and makes for great packed lunches with roast veg and roast chickpeas.

Another one of Jamie’s, serve it with or without vegan cheese and coconut yoghurt on the side. It’s great for the slow cooker and would go well with veggie sausages too.

Okay this last one’s not a recipe but it’s important! Finding the best alt milk for tea has become a weird hobby of mine. The Barista version of Oatly’s oat milk is super creamy, goes perfectly in tea and coffee and has the most naturally milky taste in my opinion. It’s also great in porridge and smoothies.

The company’s ethics are sound and they grow all their organic oats in Sweden so you know the provenance of the ingredients isn’t dodgy.

It was roughly 2am on February 17th 2013 and I had just walked into Krunchy Fried Chicken in Fallowfield, Manchester, with my mates, a horde of sisters and their boyfriends after a particularly silly night out. I ordered a chicken burger and chips (not for the first time).

I noted the unprocessed real meat, the salty gnarled batter. As students, this very burger was what we had come to worship as the pinnacle of food, joy and life.

It hit me that I had just turned 21 – and I was conducting this strange coming-of-age birthday chicken ceremony in the best place I could think of.

Oh how times have changed.

It never occurred to me at that point to question where the meat came from. The UK has nearly 800 livestock mega farms, processing cows, chickens and pigs. About 80% of chickens and 75% of breeding pigs in this country are factory-farmed. Two out of every three farm animals in the world come from factory farms.

Now, I do not know where Krunchy was getting its fried chicken in 2013, and I am not about to accuse them of any wrongdoing. But the likelihood is that factory farming is producing the supermarket ham sandwiches, corner shop pints of milk and office cakes that are ubiquitous in our lives.

Why is this an issue? For starters, factory-farmed meat plays a huge part in:

Let’s head to October 2017, specifically, the first Extinction and Livestock Conference, held in London by the WWF and Compassion in World Farming. Stay with me. The conference title references the link between factory farming and our own survival, and made me realise that eating quality meat, dairy and eggs (or not eating them at all) is perhaps the most important thing we can do to help the planet.

Here’s where I go a bit more in depth, on just two points.

It was agreed in the 2013 UN Paris conference that in order to avoid more death, famine, floods, drought, exacerbated storms, malnourishment, water-borne infections and heatwaves (all caused by man-made climate change) we need to stick to 1.5C.

You can see there is a discrepancy in the figures.

How is climate change affected by factory farming?

Livestock farming alone makes up 14.5% of global man-made greenhouse gas emissions, according to the UN. Two thirds of that comes from cows.

When you consider that deforestation is responsible for another 11% of man-made emissions, factory farmed meat starts to look pretty unappetising. Deforestation mostly happens so that we can grow crops to feed animals. This is linked to…

2. Biodiversity loss, which means we’re killing animals, plants and insects. Since the 1970s, when factory farming really kicked in, we have lost 50% of the world’s wild animals. Destroying our ecosystems means we may not be able to keep growing food. An obvious example is that we need bees to pollinate our crops.

Why is biodiversity loss affected by factory farming?

Cutting down rainforests and savannahs is all in the name of growing corn, soy, wheat and palm. Palm oil goes into all kinds of products, and not just food. But the other three mostly go on feeding factory-farmed animals, including fish.

Philip Lymbery, head of Compassion in World Farming, says that animal feed is the number one cause of biodiversity loss.

He also says: ‘Those industrially reared animals are currently chomping their way through enough food to feed an extra 4 billion people on the planet.’ That’s half the world again.

Factory farming, where animals stay indoors for most of their lives and are fed on crops instead of grass, uses up our resources in an incredibly inefficient way. It takes 100 calories of cereal crops (wheat, corn, rice) to produce 17 to 30 calories from meat or milk.

What on earth can we do?

For a start, give up factory farmed food. If you eat meat and dairy, find out where it’s from. Ask the butcher, ask cafes and restaurants where they source that meat from. Be that person! Businesses notice and change when customers question their models.

Buy organic wherever possible. Rules for organic dairy farmers mean that cows are required to graze grass for at least 200 days a year.

Do your best to go for something veggie until you find the meat that isn’t factory-farmed. And please… don’t spend your milestone birthdays in fried chicken shops. 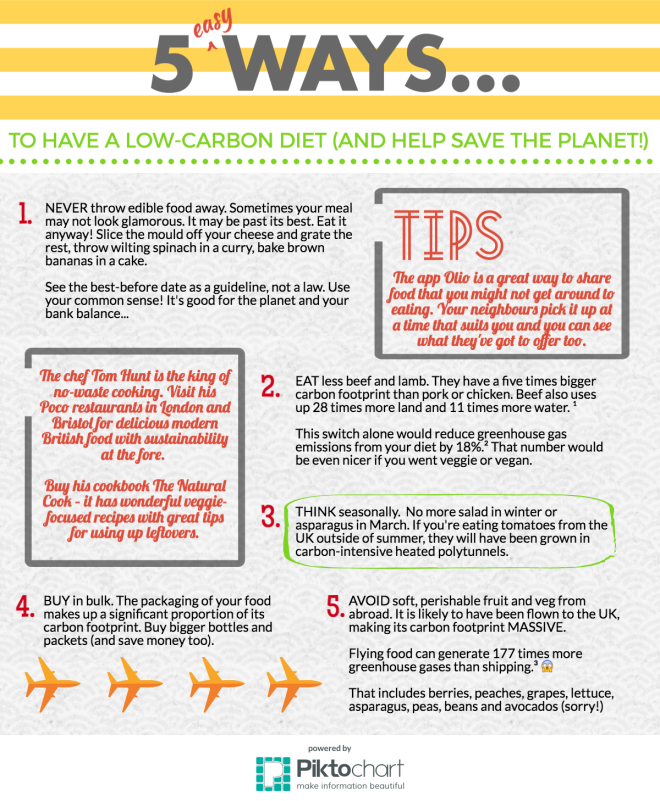 P.S. A ‘low-carbon diet’ is low in all greenhouse gases produced in the life cycle of food. So for beef, that includes methane produced by the cow. It’s easier than saying ‘a diet low in greenhouse gases’! 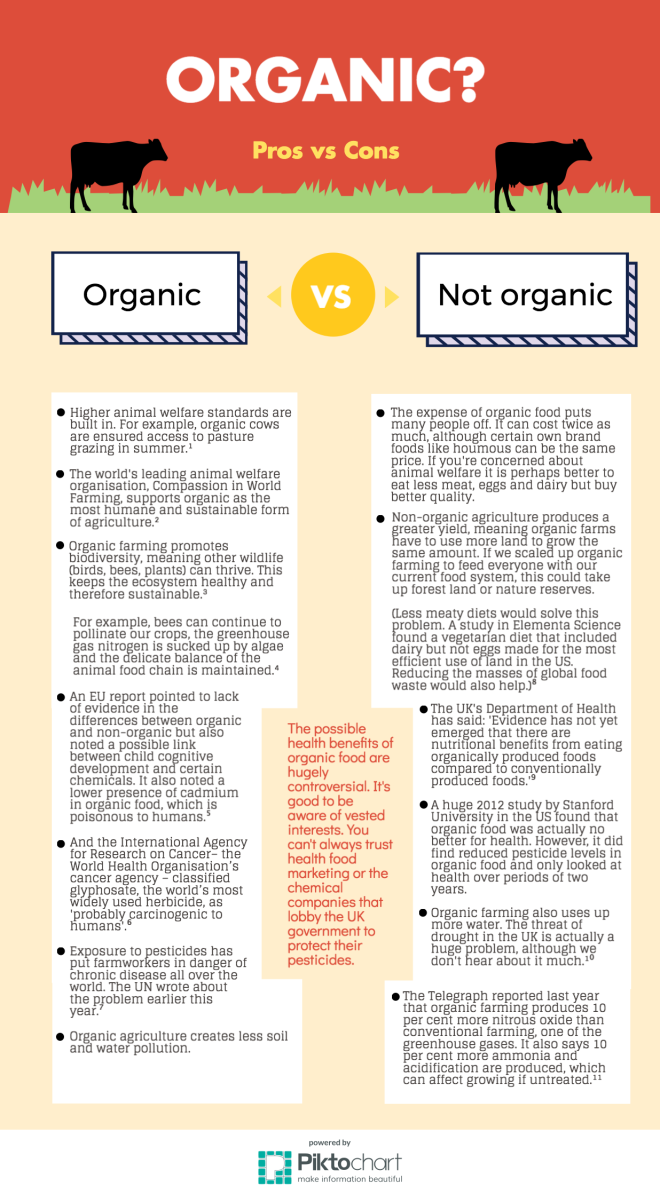